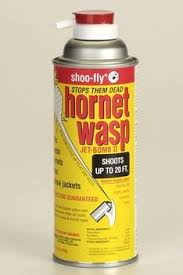 Now I have seen all kinds ofÂ information on the internet that has been posted about the use of wasp spray for self-defense. The firstÂ time IÂ saw it, I questioned it’s use for several reasons, since then I have done additionalÂ research on the subject and can find nothing that would convince me it works. Plus, in any self-defense situation, you must know the law as it applies to different scenarios. For that purpose, this book about the law and self-defense is a must have.

Personally, I am not going to trust my life to an unproven idea, that I have read on the internet.Â  I can find no verifiable instances in which it has worked, nor can I find any police department or other reputable authority that says it works. Don’t trust your life to it.

You can read more about using wasp spray for defense here.