The other day I received a container of Survival Matches and a box of their Stormproof Matches from UCO.  In the last few days I have had a chance to play with them.

UCO states “The Stormproof Matches are easy to light, and will stay lit for up to 15 seconds, even after being submerged in water!”  They come in a cardboard box that contains 25 matches and 2 strikers.

UCO Survival Matches come in a waterproof case that includes 15 matches and 2 strikers. The case features an integrated, replaceable striker on the outside to provide an easy location for lighting matches. Survival Matches are a compact version of UCO Stormproof Matches and are easy to light, and will stay lit for up to 12 seconds, even after being submerged in water.  I counted the matches in mine and only found ten, giving them the benefit of the doubt this may have been a second that they sent me.

The first thing I had to do was test the claims made by UCO.  Both matches were subjected to the same tests.  The matches lit easily enough when the enclosed strikers were used.  Blowing them out was next to impossible.

Blowing as hard as I could the flame would barely flicker and believe me my wife says I am full of wind.  So now, for the last test, will they stay lit after being submerged in water?  I took a glass of water, lit a match and dunked it in the water.  The flame died down but reignited as soon as I pulled the match out of the water. These matches did everything they claimed.  I have made my own waterproof matches in the past, but have never had any perform like these.  They are not cheap but if you really want the best, they seem to be it.

See also  The Necessity of a Manual Can Sealer for Preppers

Grab some for yourself and keep them handy for the next major emergency. 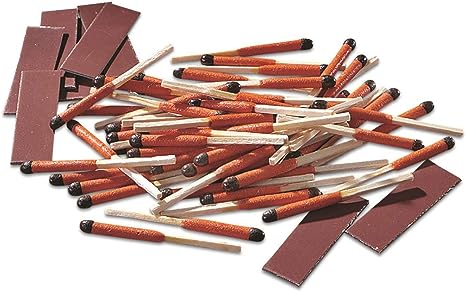 UCO Survival Waterproof Fire Starter Matches, 100 Pieces Buy Now
We earn a commission if you click this link and make a purchase at no additional cost to you.

A Must Read
EMERGENCY PREPAREDNESS & More: A Manual On Food Storage and Survival: 2nd Edition Revised and Updated
Buy Now
We earn a commission if you click this link and make a purchase at no additional cost to you.